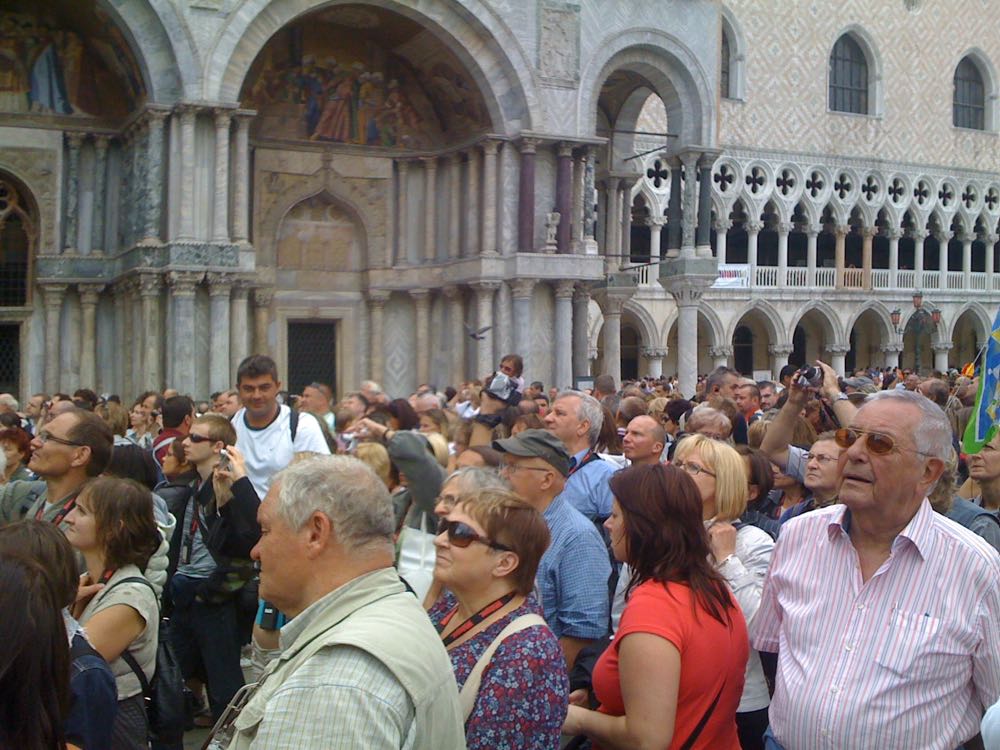 I’m happy to share a very useful set of information and tips for our many visitors! The handbook has been elaborated by my friends of the Gruppo 25 aprile: “a group of Venetians, “native” and not (Venetians by choice, in all cases) (…) now risk being forced out of our environment (…) because of the cost of living and the lack of appropriate job opportunities.”
As we Venetians are pleased to have you as a visitor in our magnificent city, full of art treasures and with a long and extraordinary history, we’d love to prevent you from being cheated.
This information has been conceived especially for the time of Carnival but they are useful all year round.

One more tip from me before you go ahead with reading this very well done handbook: The best and reliable guidebook about eating in Venice is by Michela Scibilia “Venezia, osterie e dintorni” that you can download also in English as an app: Tap Venice Eating.
Needless to say, we’d also help each other, residents and visitors… we’d warmly appreciate if you don’t stop on the bridges blocking the people behind you 🙂
Welcome to Venice! A city to enjoy and respect.

And if you’d like to book a tour at a slower pace, out of the beaten track, please contact me!

Venice Carnival survival Kit – by Gruppo 25 aprile.
Rule n.1: Avoid it unless you have already booked your accommodation. If you want to visit Venice there are periods when the city is less crowded, the risk of being overcharged is smaller and the chance of enjoying its beauty is much bigger.
Rule n.2: If you really want to be here for Carnival, avoid “red sticker” days: these days the access to the area of st. Mark’s will be limited and a new person counter system will be experimented. In order to know how this will work, stay tuned on the official channel of the City Council, which has not yet released any official information in this respect but will do it soon: http://www.comune.venezia.it/
Rule n.3 The most overcrowded days are likely to be: Saturday 27 January, Saturday 3 and Sunday 4 February, and all days between 8th February (“giovedì grasso”) and 13th February (“martedì grasso”).

Chapter One: the Water Taxis

Water Taxis: yellow, green and red
Water taxis have a yellow identification stripe with the logo of “Comune di Venezia” and their identification number, in addition to a yellow flag at bow; if the flag is green the fares are different (it is a kind of rental service).
The “yellow flag” taxi service is located in Venice island, Lido, and from here to the airport (not vice versa from the airport is only green flag).
Golden rule n. 1 is: ask for the price in advance, rather than getting lost in this colorful jungle.
Golden rule n. 2: be aware that not all taxis accept credit cards, so ask them in advance or be prepared to pay cash!
The service is very reliable and, contrary to most cities in the world, it is unlikely to be affected (delayed) by traffic jams or traffic lights.
There are two types of fares:
a) set fares between taxi stations;
b) meter: if the place where you start/end is not a taxi station. In this case a set fare is applied with a supplement.
If there are more than 4 passengers, if there are many suitcases and for night service an extra supplement will be applied on the fare indicated on the meter, that is placed behind the door of the taxi.
There are 14 taxi stations, these in addition to set fares can be found on the following website:
http://www.comune.venezia.it/it/archivio/19521

The law of supply and demand applies to all tourist hotspots, and not only to Venice. If you want to get food while sitting close to the Grand Canal or with a view on Piazza San Marco, you should not expect to spend less than in Piazza Navona (Rome) or similar places in Paris or London.
On average, however, eating in Venice is not more expensive than elsewhere, especially if you get out of the mainstream tourism flows, and can even be cheaper than average if you opt for the local tradition of
“cicheti“:
small fresh food, that you can also enjoy while standing rather than sitting in a traditional restaurant. Don’t confuse it with “fast food” because it is not: being made on the spot with products of the day, the quality of cicheti is often remarkable. They are normally served in places called “osteria” or “bacaro” but be aware that:
Golden rule n. 1: the name given (by the owner) to the place does not mean anything. The infamous restaurant where four Japanese students were charged with a € 1,143 bill was named “osteria” (!) but the bill had nothing to do with its reassuring name.
Golden rule n. 2: Be smart and in case of doubt double-check Trip Advisor before making your choice. While it is definitely not an indicator of what is “the best in town”, it is a safe indicator of how to avoid the worst.
If you decide to fully enjoy the meal and take a seat in a restaurant (or whatever its name: locanda, trattoria or pizzeria) be aware that in Venice they are fully entitled to apply, on top of the prices and provided that they are properly disclosed in advance:
Needless to say, there is no need for tipping where you have already paid for “coperto” and “servizio”, unless the service is so unique or outstanding that tipping is the best way to express your appreciation.
Several blogs can tell you how this works in practice:
http://ciuitaly.com/blog/files/coperto-italian-restaurant-cover-charge.php
When it is time for lunch or dinner, in Venice you will find plenty of choices but do not expect to find Venetian or even Italian food in every corner: in the area close to Piazza San Marco, for instance, most restaurants are owned by foreign communities and their food is just a pale imitation. Whatever your choice is, you might wish to consider the following tips.
Golden rule n. 3: good restaurants do not need to “reel you in”. If they pay a “buttadentro” outside the restaurant it is not a sign of quality.
Golden rule n. 4: pictures of the food on the menu? Most of the time it is frozen food.
Golden rule n. 5: Ask for a printed menu, this is mandatory under Italian law. If you are being suggested a special “fish of the day” which is not on the menu, ask for the price in advance and bear in mind:
Golden rule n. 6: ask whether it is a fixed price or “by the pound”: if the fish is actually fresh, you will pay by weight, not by portion. While this might be an acceptable rule for fish served as “main course”, some restaurants seem to apply the concept even to pasta “all’astice” o “alle vongole” or “risotto di mare” (irrespective of whether the seafood is fresh). Apart from the fact that you will not be able to check the actual weight, this sounds like a joke to any Italian customer: the “primi piatti” in Italy should have a fixed price; if this is not the case, run away before having to argue or lodge a complaint about the bill.
Cowboys can be found in all tourism destinations, don’t be their “milk cow”. They are a minority but should not be left unpunished because (if unpunished) they destroy the reputation of such destinations, on top of spoiling your holiday.
This survival kit is aimed at making your stay pleasant, rather than spending your time in the local Police station or arguing about the bill.
If you have serious reasons to argue about the bill or any other commercial practice, the telephone number of the Venice Police for this kind of complaints is:
(+39)041.2747070
—————————–
Copyright and credits:
Corriere della Sera (for the article)
Alessandro Toso Fei – Etra Comunicazione (for the logo)
Marco Gasparinetti – Gruppo25Aprile (for the text)
The text can be used free of charge by whoever finds it useful, as long as the source is quoted.